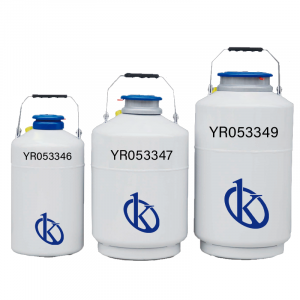 Nitrogen tanks are essential equipment for the application of artificial insemination (AI) technique, since they allow the conservation and storage of frozen semen, for long periods. This facilitates the use of AI in many livestock farms worldwide. With AI technique, we can get the semen of the reproductive male, he raised and preserved it, and then introduced it into the female genital tract, using special instruments.

Semen is a biological product that must be maintained at temperatures of -196°C, to ensure the vitality of the sperm during transport and storage. To achieve this temperature, tanks of liquid nitrogen are used. These are cryogenic therms whose designs double-walled, they favor the maintenance of cold provided by liquid nitrogen (LN 2 ), inside the tank. The temperatures achieved with this system, allow the conservation of semen for extended periods.

This gives advantages to different livestock systems, such as facilitating the national and international transport of semen, avoiding the movement of breeding males. Reducing health risk, through prevention and control of disease, as direct contact between male and female is avoided. All of this leads to lower costs and a positive impact in the management of livestock worldwide.

It consists of two containers, one inside the other, between which there is an empty space. The outer part must withstand thermal oscillations; the inner part contains the nitrogen; it is emptied and has no welds, which favors a uniform temperature. Its special alloy can withstand extreme temperatures. This inner container, is connected to the outer wall through the neck. This point is critical and fragile, so a sharp motion or blow can cause a broken thymus gland.

The tank has a cap made of insulating materials, to prevent liquid nitrogen from evaporating quickly. However, it must favor an escape route so that the pressure inside the thermos does not increase dangerously.

The lid has a design with grooves that accommodate the arms of the containers where the semen straw is placed. These have a cylinder whose size varies depending on the thermos and the size of your neck. The containers are attached to the neck of the thermos.

The tank represents an important investment in the equipment used for AI, so it must be handled with care, avoiding bumps and kept in protected places, protected from direct sunlight. The area where the tank is located should be clean, dry, and well ventilated, but without strong windy currents. The tank must be separated from the floor, preferably on a wooden platform, without contact with the boot or corrosive materials and compounds.

It is also important that the location of the tank facilitates its filling with liquid nitrogen. In addition, this site should be illuminated to allow frequent monitoring of nitrogen level. As far as possible, reduce the movement or transport of the tank in order to avoid shocks that could damage them. When it is necessary to move it from one place to another, it should be lifted by the two handles and preferably by two people. If a vehicle is to be transported, secure it with ropes or tapes that prevent movement.

It is recommended to confirm the semen inventory before taking it out of the tank, to ensure that the correct basket is being handled. In addition, it is preferable to keep the same bull or bulls of the same breed, in a single basket.

Uncap the tank when strictly necessary, as every time the tank is uncovered, it loses nitrogen.  Do this only in the following cases:

Criteria for the selection of a nitrogen tank

There are different types and sizes of tanks, which can be classified as follows:

Selection will be made depending on the specific needs of each livestock company. It is advisable to take into account the number of animals to be inseminated, the length of the service season, the quantity of semen to be stored, the availability of nitrogen in the area and the economic possibilities of the producer. Perhaps the most accurate criterion to follow is to use the cost of storage of the doses of semen per year is more appropriate for the livestock company.

A wide range of Nitrogen tanks of the YR series is offered, in which you can choose the most appropriate for the purpose of the livestock company. These products offer high thermal efficiency, at LN evaporation loss storage 2 extremely low and advanced vacuum and super insulation technologies. For more information about Kalstein Nitrogen Tanks, please visit the link HERE

previousHow does an oxygen concentrator work?

nextNitrogen Tanks for the Conservation of Biological Samples