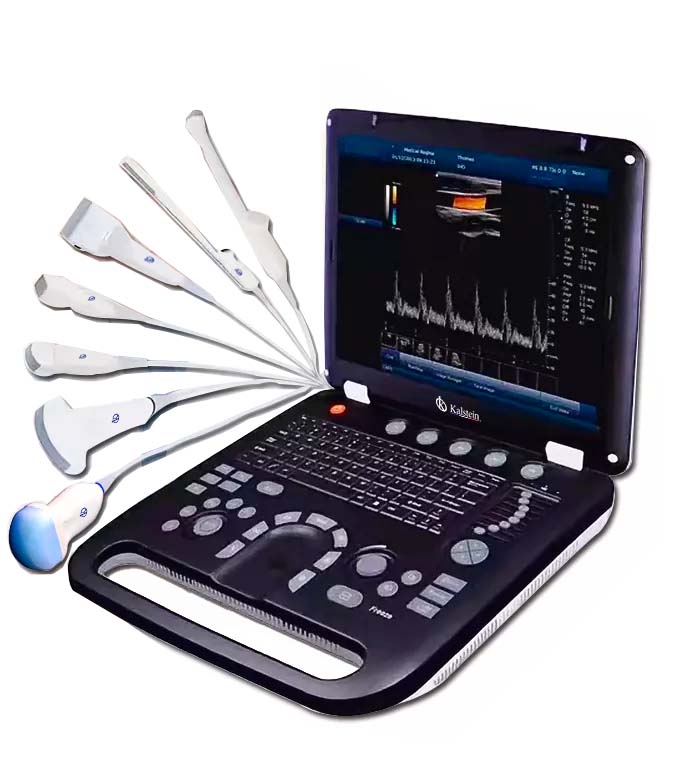 An ultrasound scanner is a specialized medical device that uses ultrasonic waves, i.e. waves with frequencies above the human ear threshold (more than 20,000 cycles per second or 20 kHz) to obtain images of most soft tissues. This instrument provides diagnostic images from the echoes obtained by the emission of these waves.

Diagnostic ultrasound is a noninvasive diagnostic technique used to produce images of the body. For this purpose ultrasound scanners have a transducer, which emits ultrasound waves, and these high frequency sound waves are transmitted to the area of the body under study and their echo is received. The transducer picks up the echo of sound waves and a computer turns it into an image that appears on the screen.

How is an ultrasound scanner used?

Most ultrasound probes are placed on the skin. But to optimize the quality of the images, the probes can be placed inside the body through the gastrointestinal tract, vagina or blood vessels. In addition, ultrasound is sometimes used during surgical procedures by placing a sterile probe into the area where the operation is performed.

Upon coming into contact with the different structures of the body, the ultrasonic waves produce an echo which is captured back by the transducer, thus producing real-time images of the internal structures of the organism which are displayed on the monitor for analysis.

Operation of an ultrasound scanner

The operation of an ultrasound scanner is based on the activity of a device called a transducer that captures the echo of sound waves and a computer transforms it into an image that appears on the screen. The elements that make up part of the transducer are commonly made of ceramic glass and are called piezoelectric materials. These are able to produce sound waves when an electric field passes through them, and they are also able to operate in the reverse direction, producing an electric field when it receives sound waves.

Different tissues alter waves in different ways, some directly reflect them and others disperse them in the form of echoes before they reach the transducer. That is, using the speed of sound and the time each echo returns, the scanner can calculate the distance between the transducer and the tissue limit. Deeper reflected echoes are more attenuated than surface echoes. When echoes return to the transducer it is possible to reconstruct a two-dimensional map of tissues and organs.

Structure of an ultrasound scanner

For ultrasonic imaging, a probe is placed on the skin (after applying an acoustic coupling gel) or inserted into a body cavity. As mentioned, ultrasonic probes have elements made of piezoelectric materials (materials that convert electrical energy into acoustic energy and vice versa). When the ultrasonic energy emitted from the probe is reflected by the tissue, the transducer receives some of these reflections (echoes) and transforms them back into electrical signals. These signals are processed and transformed into an image

Which organs can be evaluated by using an ultrasound scanner?

Through the use of ultrasound scanner, abdominal organs such as the liver, pancreas, intestines, gallbladder, kidneys, also of the pelvis as uterus and ovaries in women and prostate in men can be visualized. The most modern and very high frequency transducers allow to evaluate structures as superficial as salivary glands, breasts, thyroid, testes, palpable subcutaneous nodules, and musculoskeletal system.

Currently, ultrasound scanners have a Doppler system, which allows to examine the flow within the blood vessels, demonstrate their permeability and measure blood velocities.

Kalstein is a company MANUFACTURER of medical equipment of the highest quality and that have the most advanced technology available at the best prices of the market, so we guarantee you a safe and effective purchase, knowing that you have the service and advice of a company specialized in the field.  This time we present our Ultrasound Color Doppler YR05151, this new equipment has the following characteristics:

previousWhat are the different types of heating plates that exist?